Not your father’s hobby store 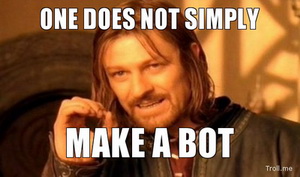 As a kid I was always tinkering with something.  I spent half my free time scrounging IC chips, electronic components, wire, wheels, belts, enclosure parts and anything else I thought might be useful.  The other half of my free time was spent trying to nail, glue, screw, solder or tie this assorted crap into something I could hook a battery up to and revive like Frankenstein’s monster.

Eventually every project needed one critical part I didn’t have and couldn’t scrounge and the absence of which manifested as an all-consuming void that took over my life and became the focus of every waking hour, until I convinced my mom to take me on yet another pilgrimage to the hobby store.  The place was my temple.  I was convinced I could prototype any possible manufactured good with the supplies contained within those walls.  If at that age I’d disappeared, then rather than putting my photo on a milk carton, my family would have staked out the hobby store and waited for me to show up.  They knew that eventually my captors would be forced to either kill me or take me to the hobby store.  And if the kidnappers did kill me, my parents figured they’d do it quick and painless because by the time I drove them to it they’d be so fed up with my bullshit they wouldn’t have the patience to drag it out.

Eventually I turned my creative drive to photography, and then to software.  I stopped making physical things and forgot all about the hobby store.  I don’t know why but when I sought out a local hobby store last weekend, the first time I’d been to one to shop for myself in decades, I somehow expected it to resemble the hobby store of my youth.

Hobby stores have changed.  They have crap toys for kids now.

Oh sure I was a kid when I fell in love with the hobby store, but I was a kid with Asperger’s – sometimes called Little Professor Syndrome, and for good reason.  The store of my youth was filled with parts that you cut and fitted and shaped and sanded and glued and soldered and when you were done you had something that in the store existed only as a photo or plans at best.  Maybe they had a completed project on display but if they did it took hundreds of hours to build, finish, paint and mount.  These were the sacred objects in the temple and anyone who was interested in kid toys wasn’t allowed near them.  I got to hold them and people explained to me how they were built.

If the store had stocked bins of sparkly party favors and noise makers, I would not have been interested.  If they had racks of blister-pack, no assembly required, doesn’t teach me anything, parents-way-of-putting-kids-on-auto-pilot toys that managed to be overpriced at a dollar each, I would have walked out in disgust.  Now this drivel appears to be part of their core business.  I locked up in shock and horror five steps into the store. 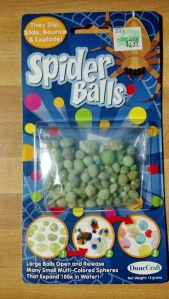 When I regained my senses I nearly gave up on my project but figured I could salvage the trip by buying some toys for Matt.  But then, after decades of disdain, I found the one item in the universe that could possibly elevate in my mind the status of blister pack crap to something I’d actually want for myself.  If you are me and, how can you NOT buy something called Spider Balls?  I mean, look at the photo.  These things are the size of small pebbles which begs the question “how big are the spiders they harvest these from?”  Except for bad sci-fi movies, I’ve never seen or heard of any spiders that size and I once kept a tarantula as a pet!  Is there a place deep in the rain forest where spider balls are collected?  Ten harvesters go in and 8 come out with back packs full of spider balls and two sets of dog tags?

Meanwhile back in the forest there’s a colony of ginormous spiders, half of whom have post-traumatic stress disorder and gather in support groups.

“Hi I’m Webster.  I got my 5-year badge today.  Yes, thanks, I know.   It’s quite an achievement.  Had I been destined for a normal life, I’d have mated and been eaten 4 years ago.  Now that’s a life I can only dream of.  It’s depressing.  I can’t get dates, my web’s a mess and I spend my days sitting on the highest tree leaves screaming EAT ME at passing birds. If only I still had my balls.”

That alone was enough justification to buy them.  The description on the back was just a bonus at that point.

What are Spider Balls and why do we call them that? Drop one in water and find out as a multitude of multicolored slippery spheres will burst forth from the green sac and grow up to 100 times its size within hours! You can roll, throw, bounce, and try to squish the balls once they are hydrated- just like real spiders!

I’m sorry, what?  Roll, throw, bounce and try to squish the balls just like real spiders?  WHO DOES THAT TO REAL SPIDERS?  And it’s not just some copywriter cooped up in a back room scraping spiders off the walls.  It says “why do we call them that.”  There’s enough of these whackos that they formed a consensus about the name of the product!  They actually had a meeting where they talked about names and someone said “you know, you can roll, throw bounce and try to squish these things – just like real spiders” and instead of immediately calling the rubber suit guys, a majority in the room actually AGREED WITH HIM.

“You know, Bob’s right.  What kid hasn’t tried to roll, throw bounce and squish a spider in their day?  That’s something EVERYONE can relate to.  I think we’ve found our product name.  Let’s vote.”

So, kid toys for future serial killers, I guess.  A little further on it says “a multitude of multicolored balls will burst forth from the green sac.”  Wasn’t that an episode of Bizarre ER?  I’m sorry but I cringe and cross my legs every time I read that.

Although the packaging appears designed to appeal to kids, it’s sold as a science toy.  So I guess these are supposed to be bright kids.  Inquisitive kids.  Perhaps Asperger’s kids.  These folks don’t know their target market.  The directions say:

But read the fine print.  The balls aren’t fully hydrated for 4 hours.  What do you suppose happens to the unwitting parent who actually shows these to their kid?  Do you think ANY kid in their target market, in other words those exceptionally bright and inquisitive kids, has a four hour attention span?  How does this play out?  I’ll tell you.  The parent ends up babysitting a glass of gel while the bright, inquisitive kid is jacked into an online multiplayer game nuking monsters and chatting with friends.

“Dad brought home some lame ‘science experiment’.  Put some gel in water and watch it grow.  Takes 4 hours, if you can believe that.  Yeah, he’s still sitting there like an idiot.  Calls me over every 15 minutes to show me progress.  Yup, Dad. They’re bigger now then they were 15 minutes ago.  Ooooh.  Aaaaah.  No, I can’t come over.  I’m stuck here for the next 4 hours.”

What a GREAT bonding experience and so educational as well.  Or at least it could be if they gave you any information at all about the physical and chemical properties of this stuff.  No, it has an unusual capacity to absorb and hold water and highlighting that one single quality is sufficient to sell it as “science”.  No need to do any real science and research what its made of.  For that matter, this crew are probably not capable of performing even rudimentary science since they can’t do basic math.  The label says “Ages 4+” and just below that “Not for children under 36 months.”

The thing that amazes me most about advertising, and especially about really off the wall stuff like this, is that it’s someone’s job.  Multiple people got PAID to write this, edit it, proof it, and then someone at a management level approved it.  This marketing copy fed, clothed and housed multiple people.  Folks who went home after work one day and said to their spouse “I’m so proud of the packaging design we completed today for the new toy.”  Folks who, if you think about it, are probably their own target demographic.

If you are looking for a high-tech consolation prize in all of this consider the following.  The hobby store was once the refuge for tinkerers, hackers, makers, inventors and little professors who invested time and effort into craft and eschewed mass-produced, over-priced, over-hyped, under-designed, blister-packed crap.  What happened?  Apparently, advertising has the ability to warp the fabric of space-time in its immediate vicinity.  While we’ve been worried about NASA or the military mucking about with quantum and string theory, the advertising folks managed to master it behind all our backs.  You may be skeptical but really, is there any more plausible explanation for Spider Balls?

1 Response to Not your father’s hobby store