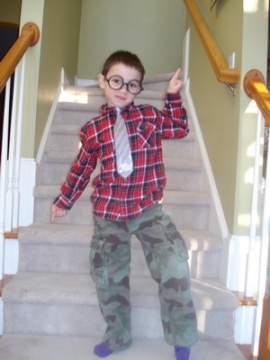 My parents in-law live next door and up a small hill.  When grandson Matt was learning to talk, both the concept and pronunciation of “Great Grandma” and “Great Grandpa” was too much for him so they are just Grandma and Grandpa.  This worked well until he had to disambiguate between them versus my wife and I, at which time they became “Uphill Grandma and Grandpa” and my wife and I became… you guessed it… “Downhill Grandma” and “Downhill Grandpa,” which didn’t please us all that much and was difficult to explain to strangers in the mall.

Fortunately for me Matt seems to have recently promoted me to the position of “Computer Grandpa.”  There wasn’t a memo or anything, no meeting where I was told of the new title.  I found out when he was speaking with my wife on the phone and asked to talk to me.  “Put Computer Grandpa on the phone,” he demanded.  Apparently, the new title also comes with greater obligations and responsibility.  I’ve been informed he needs (not “wants” but “needs,” and urgently) his own Android tablet.  Being Computer Grandpa, procurement of said appliance is squarely in my bailiwick.

My wife is a bit miffed at not having been promoted as well and remains in her current position of “Downhill Grandma.”  She mentioned something about a glass ceiling and I can certainly see her point there.  We have exactly the same seniority as grandparents, she has more personal interaction with him, and she generally gets better performance reviews.  (She is apparently awesome at making Hulk Juice which is some kind of green Crystal Lite, and gives the best hugs.  Can’t argue there.)  There is definitely some bias in the homeplace going on here and it takes a bit of the shine off of my promotion.  I’m going to have to try to rehabilitate her reputation with the boss so she can earn a more agreeable title.  Unfortunately, the position of CHO (Chief Household Officer) doesn’t open up until Matt’s language skills improve.

2 Responses to I’ve been promoted!